Hi, it’s been awhile! I will blame that on one of my biggest priorities right now, getting a college degree. With that being said, while I’m busy, I can still fit in watching the Panthers play almost every Sunday. Their latest win against the Baltimore Ravens Sunday (what a game) inspired me to share my love for my hometown team.

Ever since I can remember, I’ve been a huge Panthers fan.  (see below photo evidence: this isn’t even my earliest Panther memory but it is one of my favorites — taking in a game over 8 years ago with my Opa)

Growing up in Charlotte was extremely convenient for going to watch the Panthers play at Bank of America Stadium uptown, and I’ve been lucky enough to get to go to some of the games through the years (by the way, if you get the chance to go, GO!) Every game is an amazing experience — they’re fun and interactive, and the team thrives off of a home crowd, so it’s always a good game. My favorite game I’ve been to was the 2015 NFC Championship with my dad when we found out we were going to the Super Bowl, because the crowd was wild and the post-game celebration by the team and the entire stadium was something I’ll never forget (what I am trying to forget, though, was that year’s Super Bowl — we won’t talk about it. Still love ’em though!)

There are so many reasons that I’m proud to call myself a Panther fan.

The players are not just players — they are members of our community that serve it and help out any way they can, they are good people that engage with the fans and appreciate their support, they are guys we feel like we know really well.

Cam Newton is outrageously entertaining, there’s no telling what he’s going to say, do or wear next. It feels like Luke Kuechly is everyone’s best friend. We’ve gotten to know the personalities of Greg Olsen, Thomas Davis, Graham Gano, the list goes on — because they’re so personable and want to connect with Panther Nation.

The team emphasizes that fan connection — their motto has always been “the fan is the most important member of our team” and that has always stuck out to me as something really special. The team values the support it receives from the Carolinas and beyond, and in return, they put that love back into the games they play and the work they do outside of the stadium.

They value important causes locally and nationally that they devote time and money to, and many of the players themselves have their own foundations where they do incredible work. Greg Olsen started his own incredible foundation The Heartest Yard, which has benefitted so many families at Levine Children’s. He came to my high school during my senior year after we decided to raise money for the organization, and I just remember thinking how cool of a guy he was (and I fangirled a little as well).

Beyond their community engagement, they also play some good football! The defense is consistently ranked as one of the best in the NFL, and the offense is certainly impressive as well. The team is dynamic and incredibly fun and entertaining to watch (whether that’s on TV or if you’re lucky, in person).

The social media team is brilliant — I consistently like, share or retweet posts that they publish about player spotlights, game highlights and everything in between. That’s some good content, and one of the main reasons that my dream job is to work for the Panthers in their media and communications department one day.

I could definitely go on for awhile, but it’s just a feel-good organization. It feels good to support them and wear their colors. I think they don’t always get the credit they deserve, for whatever reason, but I think I can safely say that they’re one of the most well-rounded organizations in the NFL and I wanted to express my love for the Panthers.

No matter what happens during the rest of this season, I’ll always remain a faithful fan of the boys in blue — as they keep making me, Charlotte and the Carolinas proud. 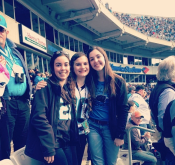